Spaghetti & Team Building: How to combine them to teach valuable marketing and sales concepts. 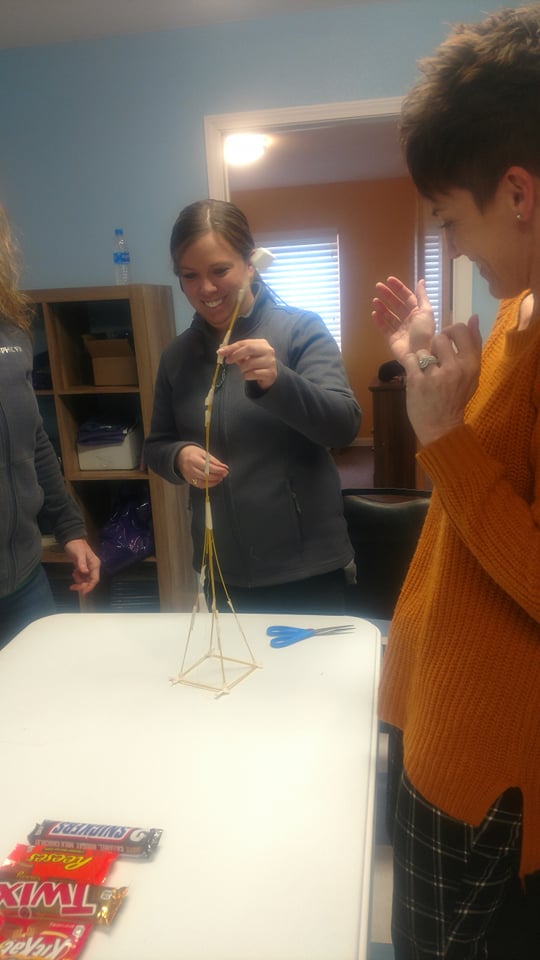 Today we conducted a team building exercise in place of our usual meeting with our clients at Graphic FX. The goal was simple: How can we keep things fun, encourage team building, and relate the experience to marketing and sales.

Ok, maybe not such a simple task…but you might be surprised!

We came across a TED talk that went into detail about the benefits of using a “marshmallow challenge” for business teams. 6min and 45 seconds later, we were convinced we just had to adapt this idea to use locally!

The challenge is simple: You have 18 min to build the tallest free-standing tower out of spaghetti sticks, thread, and tape. The top of the tower must support a single marshmallow. The tallest tower wins! 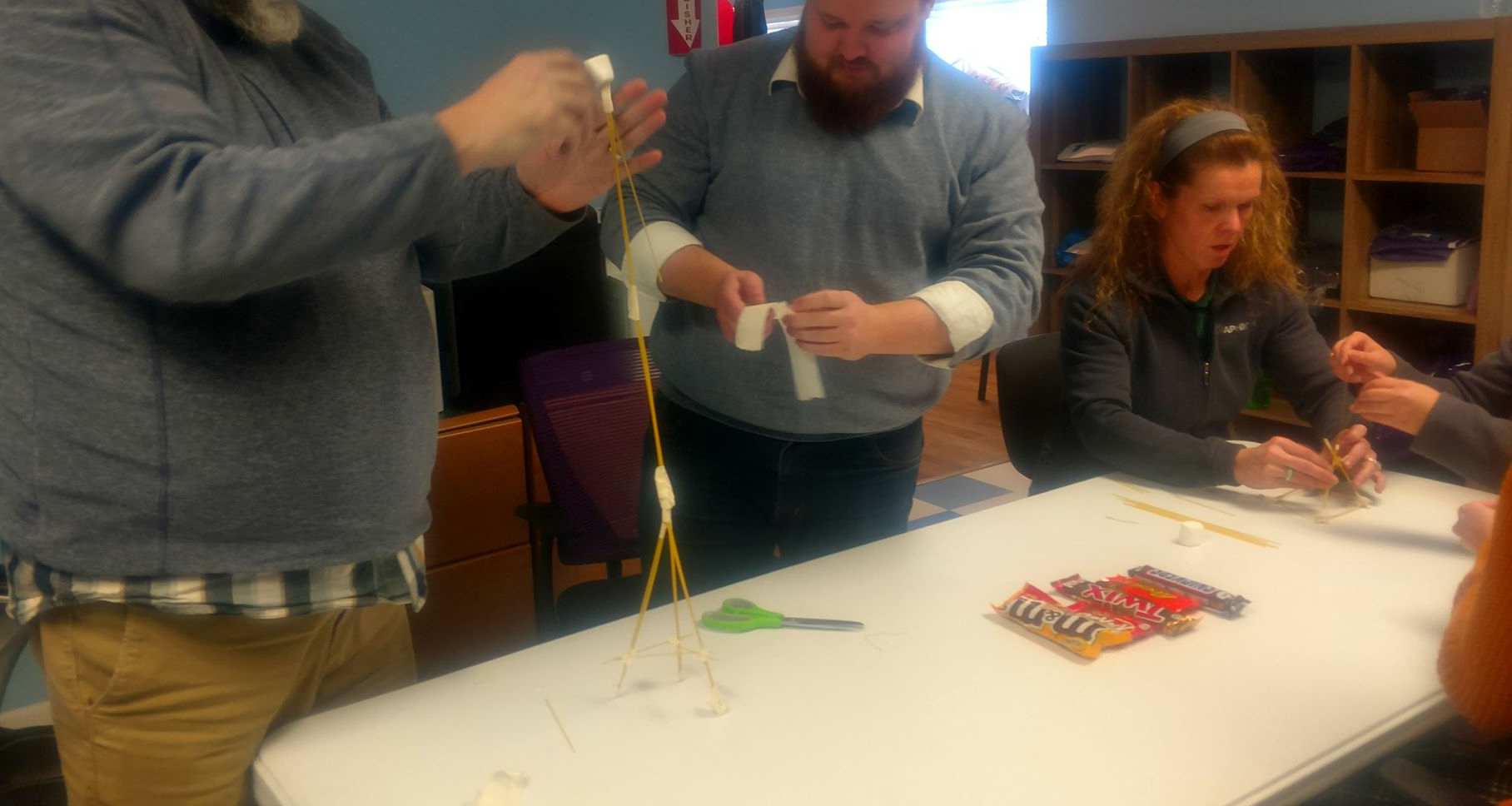 Is it really that difficult?

Now you may be thinking, 18 min to build a tower is too much time, and it sounds too easy! That is the same thoughts that were floating around today as well…but they were wrong!

The time surprisingly goes by a lot faster than you imagine it would. This relates to those deadlines we have in the workplace that end in rushed cramming to complete.

It’s common to think your have more time than you do.

Both teams started off respectfully by taking a couple of minutes to plan out their structures. Once they agreed on a plan, they carefully executed their plans.

Slight modifications were made when a minor flaw was discovered. Team 1 utilized the full 18 minutes to complete their design, and placed their marshmallow on top in the last remaining seconds. They quickly discovered marshmallows are a lot heavier than they had thought, and their tower toppled over!

Team 2 placed their first marshmallow atop their tower in 8 minutes…and they learned the same lesson. Their tower toppled over as well. Team 2 however, made big adjustments to their tower, and made it about 40% shorter than their initial plan. They had erected a standing tower that held a marshmallow at a respectable height of 19.5″.

While this was ridiculously fun, you may be wondering how this is a teaching exercise for sales and marketing…well keep reading! 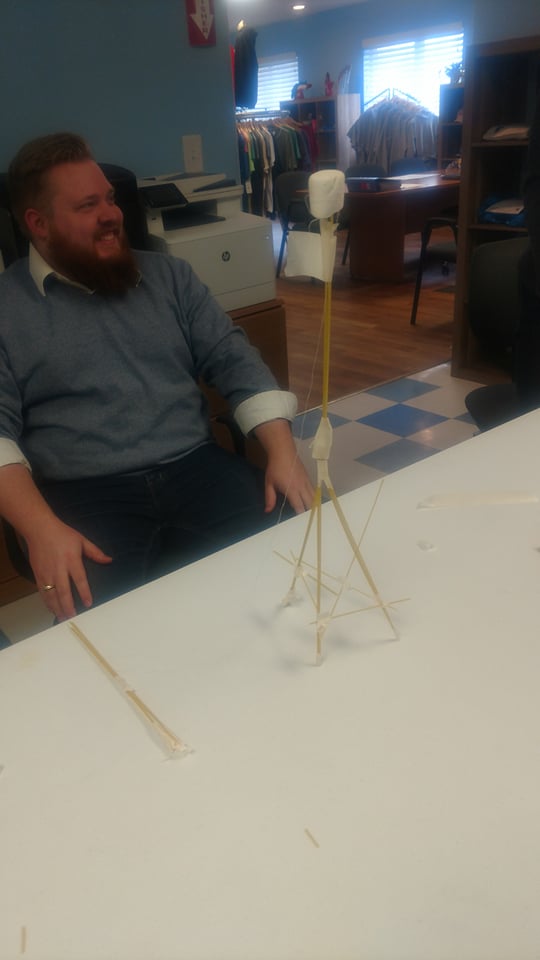 The interesting part about the marshmallow challenge, is that it has been completed by many different age groups, across the world, many many times. And the data stacks up as follows: 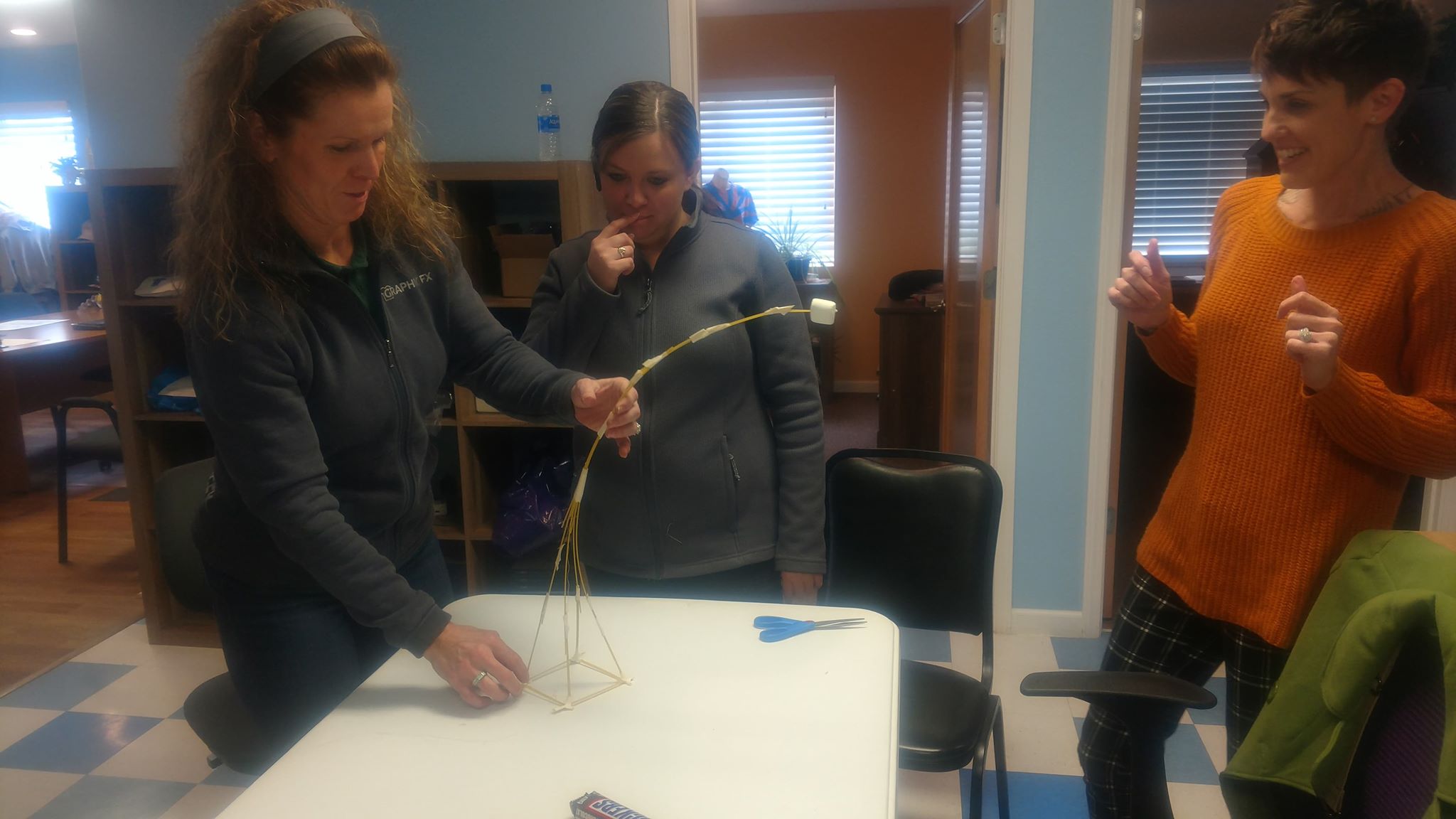 So we expect that engineers have the best structures (thankfully). But wait…Kindergarten students do better than both the average employee and CEOs? How can this be?

The answer was the biggest take away for this exercise:

Children aren’t afraid to jump right in and start failing.

Children prototype…a lot. The winning team today had made 2 prototypes. Children can make upwards of 30 or more prototypes in this same exercise! It’s no wonder the kids have the advantage; they have more information!

Much like we teach in sales and marketing, testing and adaptation is the key to success.

There is no substitute for re-active sales and marketing. Jumping in and realizing small failures along the way can reach greater results than large unexpected failures. Failures in marketing and sales are expected, and exceedingly valuable as a learning tool. Every “no” you get, is a chance to learn how to get that “yes”.

So, if you want your team to reach new heights, maybe bring back a little fun in the work place and let them bring their inner child out!

If your business or organization would like to work with Wabash.Marketing as to achieve results in both sales and marketing, please request a Free Consult here: FREE MARKETING CONSULT